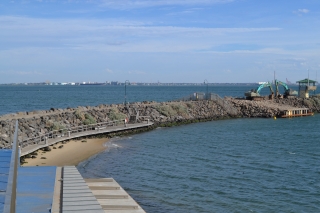 St Kilda Harbour while under redevelopment

A Channel 7 report suggested the little penguin colony at St Kilda Harbour is endangered by construction of the breakwater extension. This has been rejected by numerous groups associated with the project.

It was reported that the colony was under threat by bulldozers constructing the breakwater extension. This has been rejected by Nicole Kowalczyk a penguin monitor for Earthcare, a non-profit environmental group that seeks to conserve the penguin colony, who said the redevelopment has seen all relevant groups working well together and that the workmen on site are helping lead the effort to keep the penguins safe.

“If we have concerns about penguins being in the rocks they [the construction teams] will listen to us and they will take steps to ensure the area is managed safely when working near it. There are associated risks with this project but all involved parties are doing everything they can to minimise them“, said Ms Kowalczyk.

Charlie Harris, managing director for NSC Australia who is assigned with the task of constructing the new breakwater also feels the report overlooked substantial factors.

“Throughout the tender process the safety of the penguins was paramount not only to authorities but to us” said Mr Harris.

“We spent a long time working out best practice and consulted extensively with Earthcare on this project. We’ve even implemented certain techniques in construction that we’ve not used ever in Australia before to maximize the penguins safety.”

Construction began in January on the $6.5 million dollar breakwater extension. The project commenced after years of discussion with an aim to modernise facilities first built in the 1950’s that have since been struggling to accommodate contemporary maritime demands as well as posing safety risks.

In a statement Park’s Victoria, which is administering the redevelopment of the site, affirmed careful scrutiny has not only occurred in the tendering process but also continues throughout the works.

“Careful management of the risks and impacts on penguins has been our highest priority throughout the project. Parks Victoria, Royal Melbourne Yacht Squadron and Earthcare have been working closely together throughout the entire process to safely manage Penguins and Rakali during the works,” said Parks Victoria’s Regional Director for Melbourne Chris Hardman.

“The penguin colony is being carefully monitored with penguin spotters from Earthcare conducting daily inspections before and during works and any penguins that could potentially get in the way of machines are relocated.”

The extension of the breakwater is due to be concluded by September. This shall see the works finished before the penguins peak breeding season begins in the springtime.

The breakwater extension is an initial stage of a larger ongoing redevelopment of St Kilda Harbour, which includes increased access to the water for swimmers as part of a future pier redevelopment and the creation of more public space in the precinct.