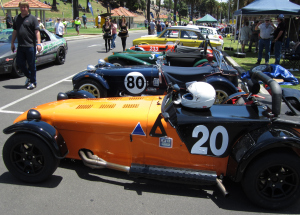 Geelong Gears Up Again for Racing

The Geelong Revival Festival was held over the weekend along the waterfront of Corio Bay, stretching all the way from Eastern Beach to Cunningham Pier. Over a kilometre of road and parkland was closed off for car lovers. So they can showcase and admire classic machinery, trade notes – and race.

Geelong has held sprint trials in one form or another held since 1956. The trials are a rare opportunity for racers to see (legally) just how fast their vehicle can drive on a metropolitan street. Struggles with financing led to a nine-year absence since 2003 when the event was last held. Although in the intervening years smaller events were held this year marks the first time sprint racing has returned, and the event was of a similar scale of its glory years.

Steve and Cate Schreck attended the festival as competitors with Steve racing his Mazda 1982 RX8. Entered into a competitive class with some purpose-built machines, the self-built Mazda ultimately came 5th with a best time of 13.8 seconds.

For Steve, alongside the competitive showing in the trials it was the atmosphere surrounding the event that made it so special.

“There are guys here who often race in front of a crowd but for me, I seldom race in front of people. This was a great opportunity to have a car I built myself and I’m quite proud other people got to see it”, said Mr Schreck.

His assessment of the festival was overwhelmingly positive.

“I thought it was exceptional. The crowd was outstanding, the weather treated us well and the event was really well run.” The crowd overlooking pit lane at the Festival

For Dave Alsop and Rod Macdonald, Co-Founders of the Classic Scramble Motorcyle Club this is music to their ears.

“It’s been away for a long time and now it’s finally back we want to see more of it and see it grow from strength to strength each year”, said Mr Macdonald.

The city of Geelong estimates over 50,000 attended the festival over the weekend. This was considered as an excellent turnout, with plans already underway for a bigger event next year.

#Topics of Prior and Enduring Interest