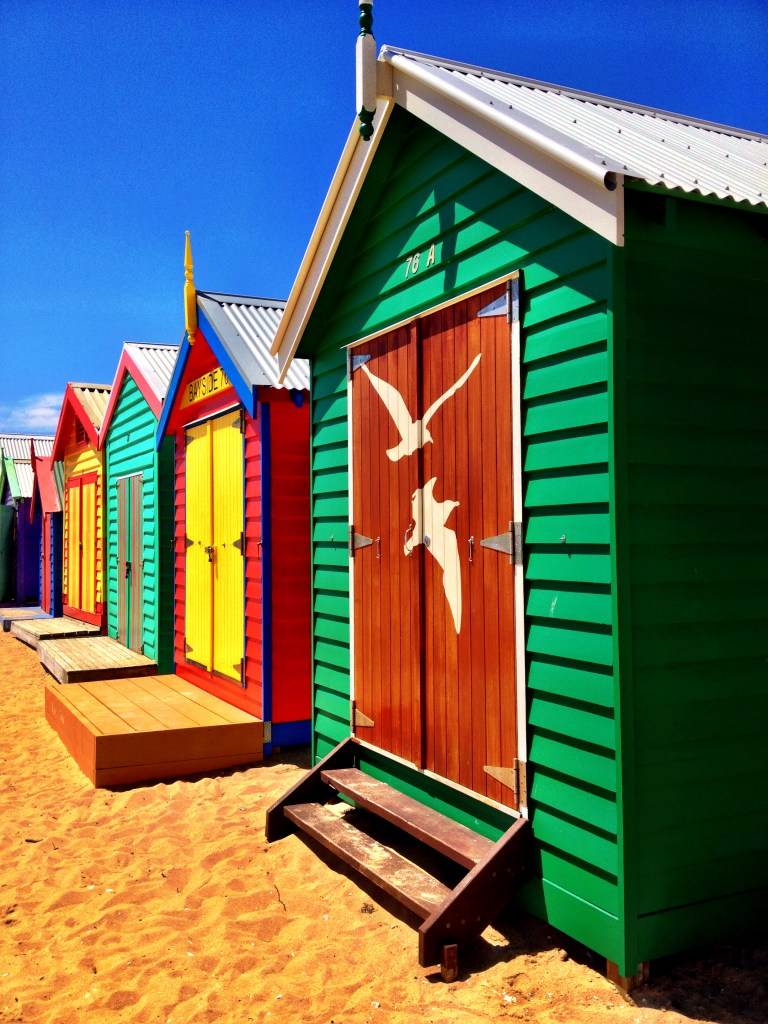 CC are Melbourne photographer Chris Cincotta’s initials. Yet, they may as well stand for the two pillars upon which he’s built his career: cameras and community. In the day-to-day trade of being a photographer in Melbourne, engagement and interaction with community is a must. However, the way in which Chris does it surely makes him a rare commodity.

This Melbourne photographer, who has spent many afternoons and evenings along the coastal trails and among the Melbourne CBD – including having shot some of Bayside’s most famed and picturesque spots – is now in a sense very much anchored down. After a most interesting couple of years around Australia and across the world, Chris is now a Melbourne-based photographer, regularly selling his photos day-by-day in the CBD, and who also a very proud Melburnian. It sounds so straightforward, but just like an Ansel Adams landscape or a Leibovitz portrait; the detail is so very often everything. Chris’ story needs to be given some further colour and scope then. By his own words, Chris says photography was not the first or most foremost love of his early life. Like many young men who’ve grown up in rural NSW – Chris originally born and raised in Merimbula – dreams of starring on a rugby field were the chief aim and aspiration when in school. For a good long while he’d both the physique and talent to look long to this idea with some expectation; before a knee injury as a young adult required another road be set down.

Yet, even though it was not until later in life that Chris starting shooting pictures – only to then to find himself unable to stop – there was a glance at what may lay ahead when just eight-years-old. Chris’s grandfather Tony left him a camera upon his passing, and with it the idea that though it may’ve taken a while to see what he’d find his happiness is; others seemingly eyed his talent early on. In turn, while his grandfather may have seen something, it was his the sight of his father Laurie that truly set Chris onto the path to his current career; and with it underscored his passion for engagement with community. As anyone knows – just the same as when a parent will feel total anguish over one of their children falling ill – the sight of Laurie having fallen ill with diabetes was a confronting and challenging moment for a Cincotta family.

Following an amputation of both legs, and in need of a wheelchair the family was faced with an upfront $8,000 bill that like so many families was an uneasy thing to contemplate attending too off-the-bat. Yet, in fine vagabond spirit Chris came up with an idea on how best to attend to the familial matter at hand: ride a bike, and ride it from the 800km from Melbourne to Sydney.

As this is an article focused on Chris’ photography the finer details of that adventure are perhaps best left for another time but in sum: it was a success, it raised the money and Chris has no bones about saying he spent much time on the road wondering what he was doing. Yet‚ ultimately he indeed made it to dinner each night (to eat lots and lots of pasta)‚ as well as to Sydney in the end. The shot that started it all. A snap looking out of Canada’s Emerald taken on a iPhone 4s.
Image: Chris Cincotta Photography

An achievement of such a thing would leave a reader most understanding if Chris desired to sit in the confines of his living room for the next couple of years resting his legs and reflecting on what a journey was had. Yet, it proved to be just the beginning. From this journey and his love of cycling arose the chance to begin work as in the tourism industry, and to head overseas.

This represents another chapter of our story whereby seeking to address the odyssey undertaken would unfairly detract from the central element to Chris’ story and his photography at present. Yet, suffice to say, friends were made, stories were collected and crucially: pictures were taken.

In contemporary photography there exists an ongoing debate about to what extent the rise of the accessibility of smartphones and Co has been a beneficial thing to the wider field – for the argument goes ‘just because there are more cameras doesn’t mean we’ll get better photos or photographers – Chris’ story puts paid to that. It all started with an iPhone 4s.

Shooting along his travels, he started to upload – and perhaps in the fine cheeky tradition of Australian’s overseas – indicated to friends he’d put up a photo each day to show what he was doing. Yet, slowly, slowly – it grew into something more. Chris revels in the work he does and finds photography to be a pleasure (but as his work evidences) – also a pursuit in which he takes much pride.

With this, as each day passed overseas Chris began to spend more and more time looking and planning for what was to become the ‘shot of the day’. Lighting, angle and more saw this Williamstown resident half a world away school himself in the fundamentals of photography and with it grow a considerably day-to-day following on his Facebook of family and friends.

Therefore, while Chris left on his bike with a job as a tour guide, he returned to Australia as a bonafide photographer: and now needed a sufficient camera to take his plans to the next level. It was to be a Canon originally. That was the plan, and Chris still maintains much effect for the beloved brand.

Yet, just as he was all set to purchase a Canon 6D on Elizabeth St one afternoon he got a call. An old Italian friend who had heard word of his plans made a timely intercession the Vatican would’ve been pleased with.

‘Chris what are you doing?’ ‘I’m buying a camera’, ‘Wait, now? Which one?’ ‘A Canon 6D.’ Then down the line came an impassioned plea from one Italian to another but of which the words are surely comprehensible to anyone who’s looked long to find a proper shutter for all their shooting.

“DO NOT get the Canon. You are a photographer with Soul Chris, we see this in your work. And so, you need a camera that has a soul: buy a Fuji X-T1 instead.”

From there, it all began to flow. Photos, ideas and ultimately the establishment of a business. However, the link with Melbourne was foremost in Chris’ mind and so he needed something more: a shopfront. Today he has one, regularly in residence and operating out of a kiosk at the corner of Bourke and Elizabeth St in Melbourne’s CBD. Chris in frame and open for business on the corner of Bourke and Elizabeth St. Image: Bayside Citizen

Though Chris is not alone as a photographer with a record for having snapped countless photos, there are indeed elements of his craft that serve to have him stand distinct amongst the wider photographic community in Melbourne.

“You know, I’ve no doubt I’m out of step with the purists. Now and then people asked me ‘but what about the rule of thirds when taking a photo?’ and things like that”, says Chris.

“I just snap what looks good. And I encourage other people to do the same. Sure, you take time to look at the scene, and see how you get the best shot – but don’t be a slave to theory when standing before something pretty.”

If his style is unique, so too is his business. Operating out of a Melbourne City kiosk, Chris has looked to ensure customers know he is not just there to sell photos but to offer a hand with a map or a tip if in need.

“Helping people at the end of the day has to be a feature of a business like mine operating in a city such as Melbourne”, says Chris.

“I’m not sure if it goes back to the Italian culture of being pretty at ease talking to people, or whether it’s just from my time and travels but certainly anyone would tell you they love a business that will go the extra mile; and how could I not when Melbourne’s got so many great locals and friendly visitors?”

“Now and then I actually get asked if I’m with the official ‘Visit Melbourne’ tourism guides; not quite! But I’m certainly happy to point someone in the direction of Melbourne Central or give them a tip for where to grab a drink if unsure.” Chris steps away from his booth to have a chat with another Melburnian photographer who called by to say hello. Image: Bayside Citizen

Alongside enjoying the daily interaction with people out of his shop, it was a wider love for the City of Melbourne that led Chris to found Humans in Melbourne, a photoblog dedicated to showcasing some of this city’s most interesting and engaging people.

“You know I’ve travelled around the world but ultimately – as I think so many people whether native to Melbourne or a transplant have found; there is no other city like it in the world”, says Chris.

“This blog was about showing that, and really seeking to put in writing and images that feeling.”

Across Humans In Melbourne is an eclectic mix of artists, buskers, fashionistas and more. All who have caught Chris’ eye and soon after looked to tell him their story and tales of their life.

And, it shouldn’t go unspoken the diversity – and real challenges – many of the folks who feature on Chris’ site have faced. Whether suffering from homelessness, mental health issues or the emotional toll taken from working as a paramedic, Chris has looked to ensure the blog is not just a showcase or Melbourne life and the lives within it; but a sincere one as well.

Chris’ photography is sterling. The hits on his website, the many people by his shop everyday, and the wider engagement he gets with members of the general public across Instagram and other social media illustrates this.

Yet, it is the extra commitment, the extra engagement and ongoing desire to see that it is not just his business that builds over time; but the conversation about how great this city is – and yet how it remains true many in it are going through some rough and tumble daily struggles; that makes this photographer and Melburnian so exceptional.

This article is written as Chris is beginning to really build the next chapter of his working life. Just like a plane taxiing to the runway, his store is setup, Humans in Melbourne is online, and he’s now well underway in building it into what he dreams it to become: a very Melbourne business that celebrates the city’s photography, its people; and most of all the wider Melbourne community.

Chris Cincotta,  a man with a camera and a real love for his wider community often seen on the corner of Bourke and Elizabeth St. Go say hi to Chris, see his photos, learn a little about Humans In Melbourne and ask him where to get some Spanish Doughnuts or a Melbourne Dim Sim. He’s sure to have a good idea.