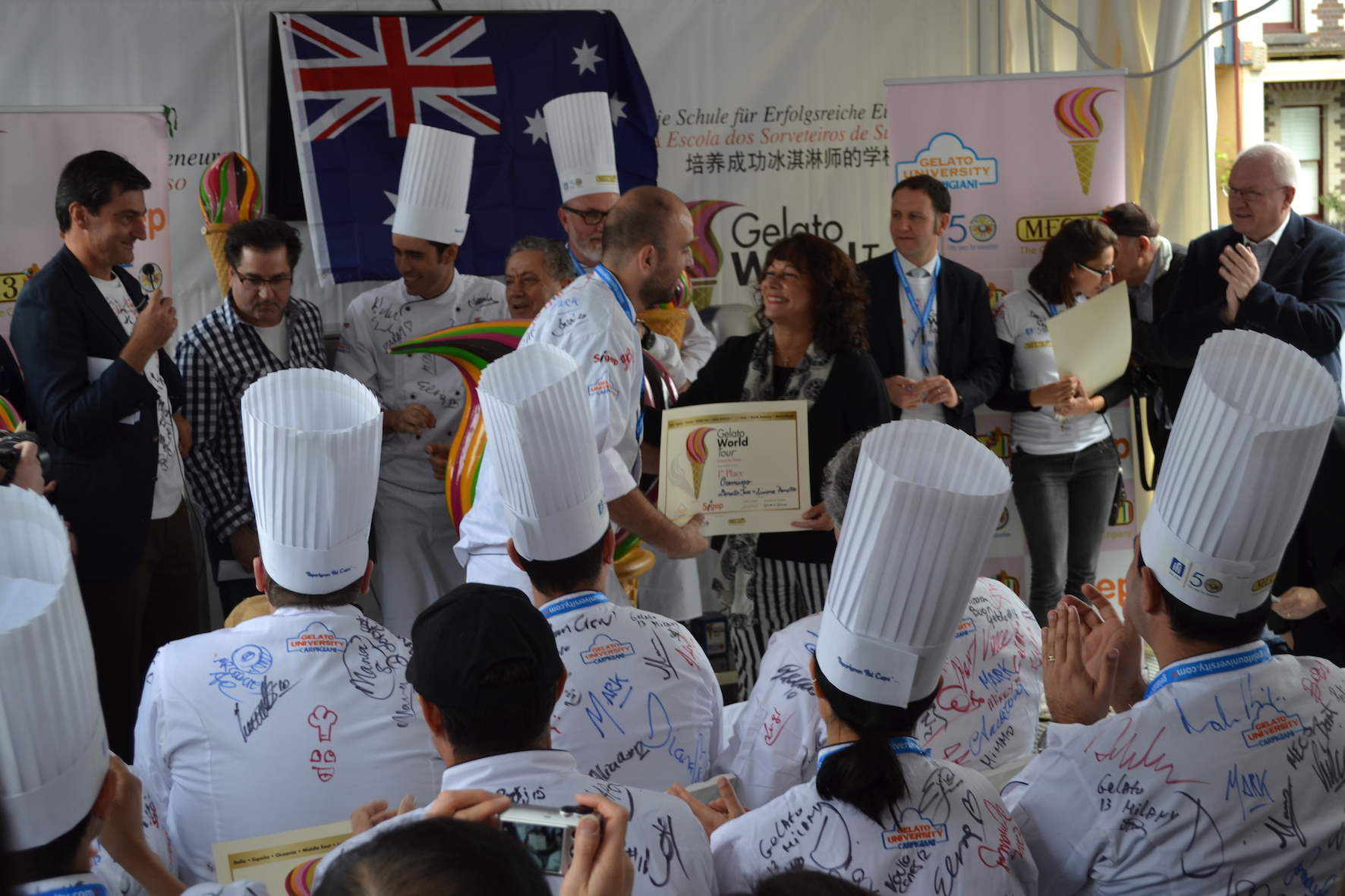 The Winners Presentation to Gelataria Messina at the 2013 Gelato World Tour in Carlton, Melbourne, Australia

Mr Toce indicated plans to open another Messina in Smith St, Collingwood by the end of November this year, which will allow Melbournians to get a taste of their award winning Gelato.
The event saw over 6,000kg of gelato produced, and over 50,000 cups and 80,000 mini-cones used.  John Crowl of Cow and Moon Sydney took second place for his ‘Mandorla affogato’ flavour, and Diana Kontoprias took third place for her ‘Pavlova’ flavoured gelato.
Michael Rizzo of Altimate Foods provided the cones in which the gelato was served, and emphasised that though the tour was a fun-filled event for the competitors, it is serious business.

“People understand gelato isn’t just ice cream but Artisan”, said Mr Rizzo.  “I think today’s turnout is testament to the fact that the public is beginning to embrace Gelato in a big way. In a city such as Melbourne, already world-famous for its great food, this is an exciting development,” he said.
The result of the judging committee, which included Melbourne chef Guy Grossi, was determined on 50 per cent of public opinion, making the process unique from earlier events in the tour.  For Mr Grossi, the Melbourne event was not just an illustration of skill from world-class chefs, but also a clear sign of Melbourne’s ever-evolving culture.

“Immigration in so many ways has made Australia’s food culture what it is. It has been instilled from each generation to the next” said Mr Grossi.  “This culture is not to be stopped. With Italian, Greeks, Spanish, Chinese, and so many more food cultures (Melbourne) is a true epicentre of world cuisine,” he said.
John Houlihan, a business consultant from Hawthorn East, visited the festival with his daughter and said the gelato is as authentic as what he sampled in Italy only weeks earlier.

“There’s a story behind every great recipe. Family recipes connect us to our shared history and keep family legends alive,” said Mr Houlihan.  “We really admire the hard work, talent and passion of the gelato artisans and we are thrilled to see such an exciting mix of tradition and creativity today, “ he said.

Though there was a ten-minute wait in line for the prize-winning flavour, Cremino, John said it was well worth it.  “Melbourne is a great city but it can seem far from some of the world’s other great cities and their cultures at times. How tremendous it is then that the world has come to us with an event like this. We will come year in, year out,” said Mr Houlihan.